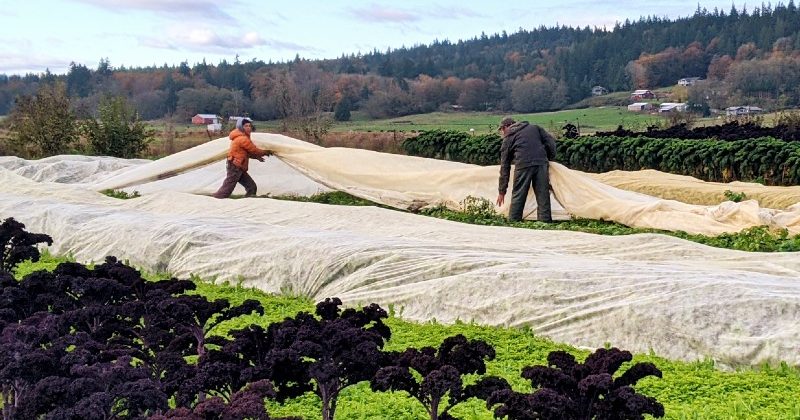 I left you last time with a newsletter about the smoke, and how we were harvesting crops in the field we call Roscoe. Squash was the biggest harvest of crops from Roscoe, along with potatoes, and both made it safely to storage before the first hard frost. The smoke has since cleared, and in its wake, a thick fog has been flooding the valley in the cold mornings. Roscoe was also cleared of black plastic and drip tape after the harvest. As observed by Karyn, the temperature has been notably warmer this fall compared to previous years, leading to a less-hurried harvest, and we were able to seed cover crop where the squash used to be earlier than usual.

Despite this fall’s warmer temperatures, laying down reemay is still an important seasonal project. Reemay is a cloth-like material that keeps crops warm during freezing temperatures and helps us bring crops through parts of the season they likely would not survive. It also prevents a large amount of pest and bug damage.

As we work, the crew is looking forward to Halloween and has come up with several creative costumes. Field crew manager Julia, known on the farm as Lil’ Shrimp, decided to disassemble her crabbing pot and put the pieces on as a decoration. I myself decided to be tropical during these cold times and be a guava. Several other members of the field crew considered seasonally inspired outfits. They opted out of being slugs, but Packshed lead Paige and her friend Henry decided to pick up the crop pest theme and be Root Maggot, a grass-root underground local performance group covering heavy metal and rock-and-roll hits.

Until next time, stay tuned.